This post outlines the new feature of PowerShell Pro Tools and PowerShell Universal that have been added in the November 2021 release cycle.

PowerShell Protect has several new conditions that you can use to generate rules to audit and block scripts. We’ve also added a built-in rule for attempting to exploit the Log4j CVE-2021-44228 vulnerability.

We’ve improved several dialogs in PowerShell Tools for Visual Studio. The script analyzer settings have moved into the View \ PowerShell \ Settings dialog. We have also rebuilt the advanced settings dialog for PowerShell projects. Both are now built on WPF rather than Windows Forms.

For the full release notes for PowerShell Pro Tools, visit our documentation page.

The December release of PowerShell Universal provides many new features built into the existing feature groups. See below for some notable examples.

PowerShell Universal now provides in-browser terminals for executing arbitrary scripts. They are currently limited to administrative users. History of terminals are maintained and terminals can be defined for any environment in your configuration.

Desktop Edition is currently only supported on Windows. Desktop edition enforces Windows authentication, is only accessible locally and hides aspects of the admin console that aren’t supported. Configuration data is stored within a user-specific location. 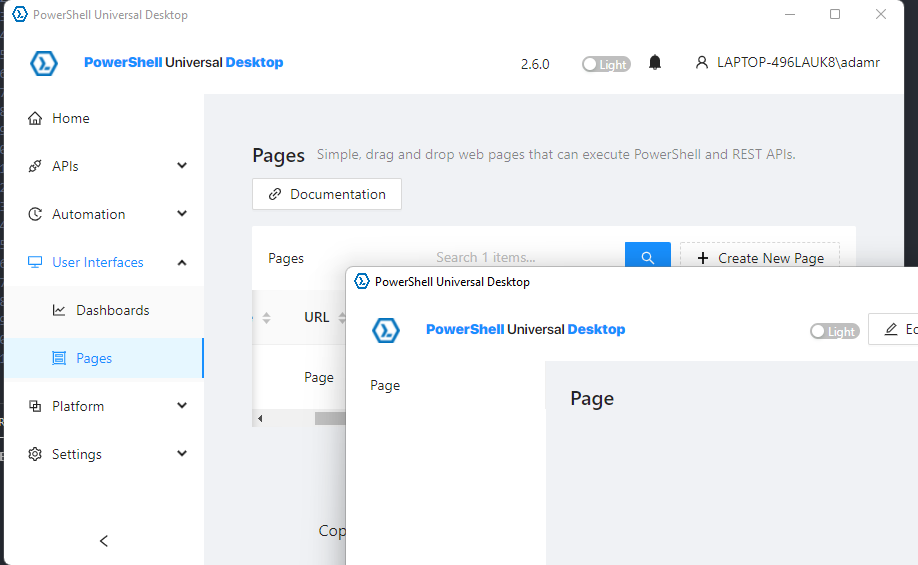 Automatic Binding to JSON in APIs

Just as you can with form-encoded POST requests, you can now send JSON formatted requests to APIs and they will automatically bind to param blocks.

For example, you can create an API like this.

Send the following to the API would automatically bind to the param block arguments.

You can upload files greater than 2GB using New-UDUpload. Files are now streamed to the server in chunks rather than all at once. This allows for any size file upload.

Improvements to Tables in Pages

Roles now support mapping between claim values. Using this configuration, you no longer need to define a PowerShell script. One example of this would be assigning a role to a group membership from Azure AD. This will slightly improve login performance since PowerShell doesn’t need to be run to check claims.

You can also view which claims are held by the current user to more easily develop claims.

The Microsoft Secret Management module has been updated to the latest version. This means that you can integrate with many of the new secret stores such as Azure Key Vault and SecretStore. We have integrated directly into the SecretStore module so you can now store secrets on Windows, Mac OS and Linux.

For the full release notes for PowerShell Universal, visit our documentation page.

If you have feedback, please post on our forums or open an issue on GitHub.